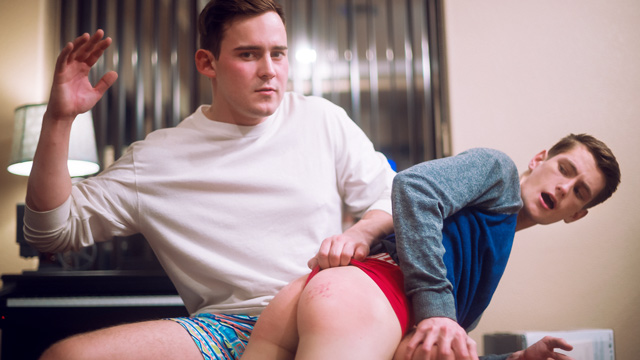 It’s Josh Brady’s day off and he wants to spend it relaxing and playing video games; but, Trevor Harris has other ideas. While Josh is focusing on his game, Trevor tries desperately to get the hot hunk’s attention. Finally fed up, Brady pauses his game and bends the sexy, slender twink over his knee. Brawny Brady brings his hand down hard on Trevor’s tight end while holding the boy’s hands behind his back. Josh gets into Trevor’s tush just as much as the video game, pantsing the pretty boy and exposing some red hot undies. The alpha ass smacker yanks Harris’ undies up in that smooth crack, reminding the red rumped boy of his high school days. But, Brady doesn’t stop there! He wants to see his handy work of Trevor’s heated hind end. He brings the bad boy’s briefs all the way down, exposing his cherry cheeks. Revved up from the sight of Harris’ red hot hiney, Brady spanks the dude’s beautiful back seat even harder, bringing out the blood red in his rump. When he’s convinced the boy has learned his lesson, Josh STILL has 10 more spankings in him and makes Trevor count them down. Harris has a smile from ear to ear; and, we can’t help but wonder if this was his plan all along.