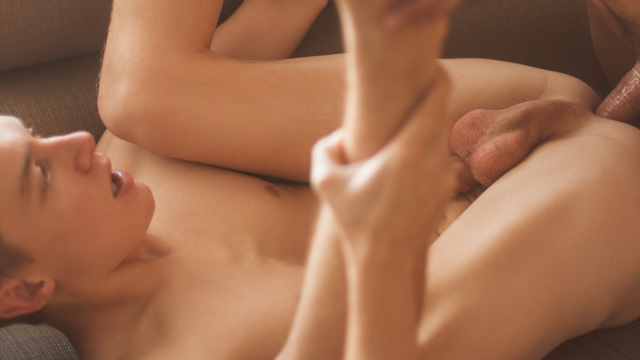 Unable to control their carnal desires, Evan Parker slams Leo Frost up against the wall the minute they open the door and get in the house! Horny as hell with hard cocks pressing against their zippers eager to escape, the guys kiss every available inch of each other as they rip clothes off, anxious to get at the goods. Evan has been working out and it shows, the guy looks GREAT! Leo shows his appreciation for all his guy’s good work by working hard on his cock. The boy’s big battering ram ALWAYS looks edible. Leo licks and sucks while worshipping on his knees before Parker pulls him up so HE can go down! Evan dominates the kid’s cock with deep throat gusto, gobbling every inch then spinning Frost around to kiss his caboose. He smacks the boy on the butt then unleashes holy hell on the the kid’s hole by slamming every throbbing inch inside till slapping sounds fill the air. Standing with one hand bracing himself against the wall, Leo looks back as Evan bangs his bubble hard as hell as he requested. Realizing they still haven’t made it past the foyer, Evan plants his well worked out body onto the couch while Leo climbs onto his cock for a ride. Parker jackhammers his giant jock up inside Frost’s cock slot, then lifts the kid up off the couch without missing a beat, a stroke, OR allowing his amazing appendage to fall out! Fuck machine Parker just continues stuffing Frost like a Thanksgiving turkey as the dirty blond bottom strokes his schlong, which is about to blow. Parker picks up the pace causing Leo’s load to explode. The camera catches the cum geyser from the side as blast after blast arch in huge spurts from Leo’s loins. Parker pulls out and unleashes his pleasure protein like a white hot waterfall on top of Frost. The sweaty pair kiss, exhausted from a fuck-tastic workout.