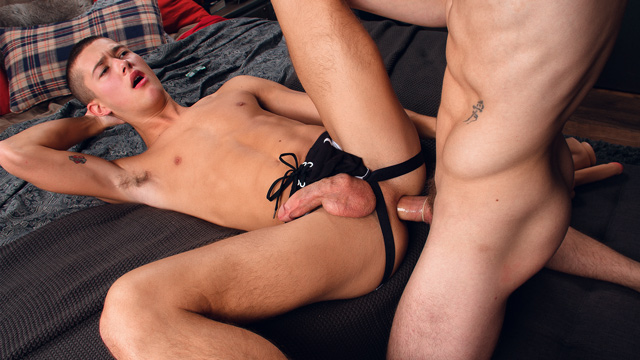 If you’re going to make an ass-play video, it HAS to be done with a spectacular ass. Sean Ford looks like he was created in a lab by a gay scientist obsessed with perfection. With his flawless caramel complexion thats probably never ever had a blemish of any kind, complemented by his naturally red full lips and an ass so smooth and round he truly is the epitome of perfection. We’ve sent hunky Justin Owen in to absolutely WRECK Sean’s hole in the HOTTEST ways imaginable.

Sean whips his cock out and jacks his hammer for a minute but Owen’s got other ideas and picks the boy up, carries him across the room, slams him up against the wall and just fucks the shit out of him! Every muscle ripples as the boys bang against the wall. And WHAT an ass on Justin Owen! #ItsTheGreatPumpkinCharlieBrown Justin whips his bottom’s jock strap off and fucks him dirty in doggy style before expertly navigating himself around to finish all over Sean’s beautiful face. Most of his love juice gets in Sean’s mouth, but what he over shoots he laps up with his fingers and eats it himself before the pair end in a dog pile of sweet sweat and a wet make out session. Yummy;)