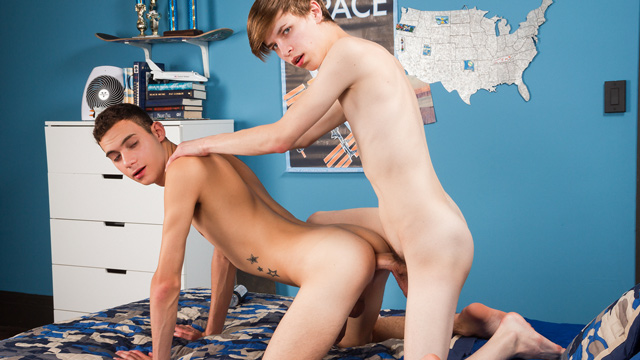 Tasty twinks Gabe Isaac and David Rhodes are feeling feisty at the park. After a little game of slap and tackle, they bring the spice back to the bedroom to get naked and naughty. Gabe is genetically gifted in the groin department, but when he sees David’s dick he realizes he may have met his match! The tall, dark and handsome young hottie is hung like a bull and Isaac makes a mouth watering manwich from boy’s beefy boner. Wanting to prove he’s got the goods as well, Gabe gets up and shoves his unbelievably big bulge in David’s wide eyed mug. David devours the huge dick before Gabe suggests he bring his olive skinned ass to his face for a sexy 69. The two teen titans tackle one another’s amazing attributes at each end, blowing bone and probing each other’s tight puckers with hot, wet mouths. Gabe’s hole gets gaped first once he sits down on David’s big bareback boner. From then on the boys tag team each other’s tight ends. The guys flip flop back and forth, filling one another’s asses till their tight teen holes need a breather from the bareback beating these battering rams are delivering. They swap holes, and spit while stretching one another out, making sure to accommodate each other’s crazy huge anacondas. After they’re both completely open, David’s laying a full force, dick beat down on Gabe. Rhodes rails the kid’s hole, pushing out a big batch of nut that blasts from Isaac’s dick, wetting his entire smooth torso. The teen creams all the way up to his neck! David pulls out and treats the kid’s taint and hole to some heavy cream. He dips his dick in the tasty stickiness before kissing his big dicked boy once more.