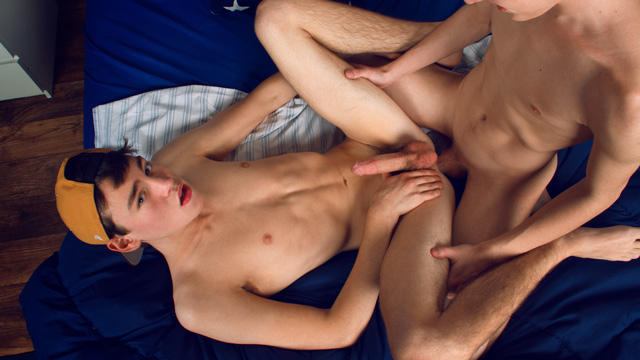 Sexy boys Alan Davis and Dawson Grant make sure no one is home before sneaking into Alan’s bedroom for some play time fun. Once safely inside, horny Grant grabs Alan’s ass and rips off his clothes hungry for whats underneath. Alan’s already pointing north by the time Dawson makes his way to his thick young dick. Grant gazes up at his friend as he throats his dong down deep. With his baseball cap to the back as to not obstruct his work area, Alan returns the favor on Grant’s engorged middle leg. He cups the boys smooth ass, spreading the tender cheeks open to give us a nice view of the smooth surface about to be eaten.

Then Davis dives in, tongue fucking the guy’s button with an expertise well beyond his years. Carefree and condom free, cute Alan aims his well ammo’d piece at it’s target and dredges Dawson’s crack. Davis dicks Dawson down before Grant decides turnabout is fair play. Really! He lays loving licks on Alan’s ass and ample appendage before blasting balls deep in Davis’s derriere. Alan closes his eyes tight to let his insides adjust and holds on to his cock for dear life as it gets harder by the second. Soon, our boys flip flop, allowing each ample time in the trenches for absolute anal ecstasy. Grant gains momentum as he muscles his monster and Alan amps up his speed too. The duo douse Dawson’s beautiful smooth, tight belly with big blasts of their boyhood. It’s amazing!